How to Get 3,241 Facebook Fans per Day Without Paying for Ads (Incredible Case Study)

Today, I’m going to share a strategy that got Steven Aitchison 3.6 million Facebook fans and continues to pull in 3,241 fans per DAY.

Of course, he must be spending a fortune on advertising, right? Everyone knows you can only build your following that quickly by paying for likes.

But that’s the best part…

He’s not spending a penny on advertising. Every single one of those fans is totally free.

I might as well just go ahead and say it…

And Steven has executed it brilliantly.

In fact, you can learn a lot just by watching how Steven runs his Facebook page.  We (the team at Smart Blogger) certainly do.

Like most things, it’s not just about using the right techniques. It’s about the mastery of those techniques.

If you follow Stephen’s advice, and you execute it with the same skill, I’m confident you’ll be pleased with your results. Let’s jump in.

Step #1: Shift Your Focus from Making Money to Helping People

Early on, Steven struggled. After starting a blog, he just couldn’t seem to get the traffic or engagement he wanted.

One day though, he realized why: 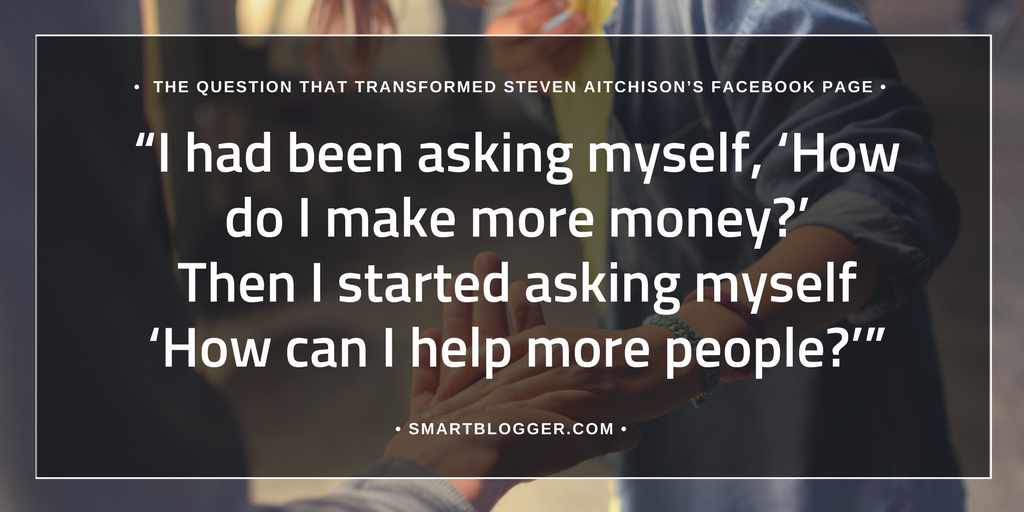 That unassuming question is the catalyst behind all of Steven’s growth over the last five years. His financial success is proof that persistence, experimentation and smart marketing can combine with a generous heart and people-first approach to build a business.

Step #2: Know Your Audience Better Than You Know Yourself

Most Facebook page owners don’t really know the demographics and psychographics of their readers and, as a result, don’t know who they are talking to. Yet Facebook gives in-depth data on your audience and their preferences within your Insights page. Aitchison’s readership is about 76% women aged between 25 and 54.

Steven intuitively follows a two-part content-creation sequence: establishing an emotional connection with readers with content that touches his own heart, and interacting with followers directly.

He makes sure the quotes and images he posts are heartfelt by asking himself if they touch his own emotions and connect with his readers on a deep emotional level. He follows through by being accessible and responding to readers directly. It’s this last step Aitchison feels is the critical piece of the puzzle that most bloggers ignore.

“I think what’s made the page explode is that I’ve really interacted,” Steven said. “Most page owners, when they do Facebook, they put some post up, they put many posts up, but they’re not really connecting with the readers.”

“Readers come back for more when they know they’ve got access to the Facebook page owner, who’ll respond to comments when you’re on Facebook Live, or shout out their name or respond to messages,” he said. He only got someone to help behind the scenes with automatic responses earlier this year.

He believes it’s about creating something readers can belong to and connecting them with your posts, quotes and videos. “It’s about connecting to something and to somebody as well,” Steven said. 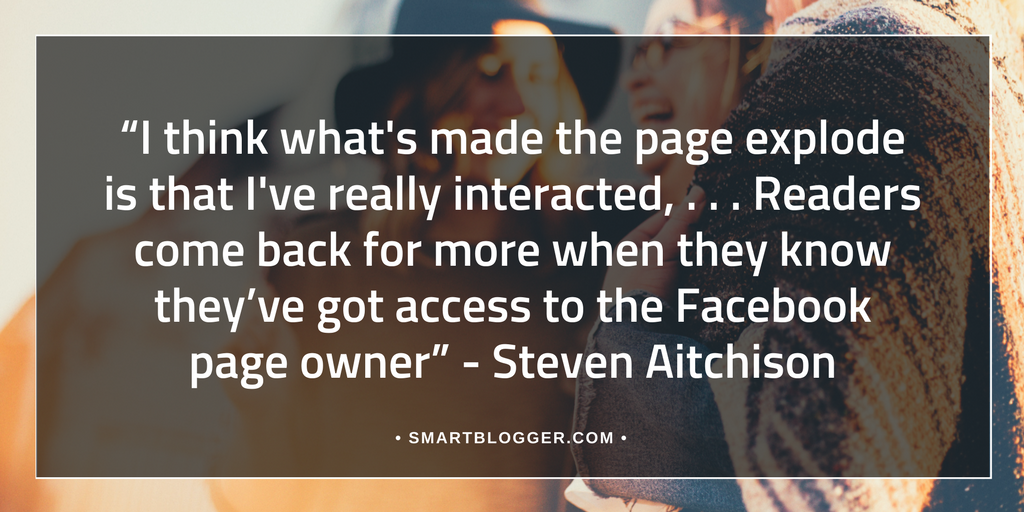 Step #4: Write Your Own “Aha” Quotes that Touch People

Aitchison is a firm believer that quotes can deliver “Aha!” moments that readers remember. When he started actively working his Facebook page, Steven was using writing quotes from other writers for his image quotes, just like everyone else.

Then he realized he was giving away free marketing, often to dead people, when he himself had written millions of words. So he began to rewrite the thoughts and concepts in his own words, putting his name below the quote. His online and Facebook recognition accelerated from 20 people finding his blog every month by Googling his name to 1,200 people. 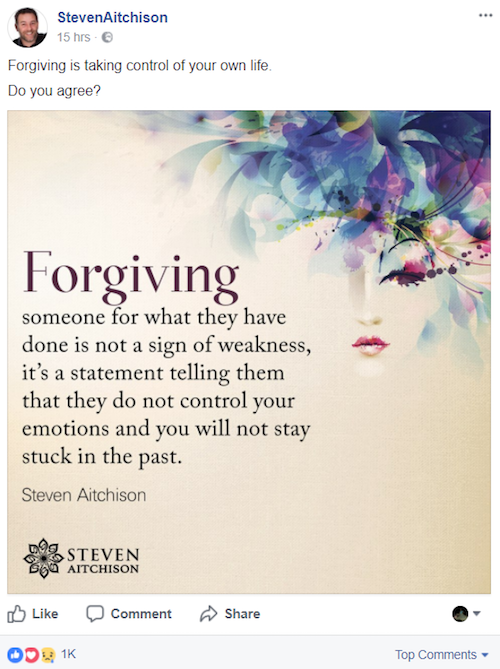 “It first started when I was doing the image quotes. Then it kind of transferred over onto video and now onto the live shows as well,” he said. This tactic is an easy and obvious way of becoming your own brand that leads directly to more traffic, more likes and, eventually, more income.

Aitchison’s entry into video was pure experimentation that triggered a social media epiphany.

He was in his hotel room one night while at a conference in San Diego in 2016 when he decided to try Facebook Live, which had been recently introduced.

“I thought, I’m going to try this and see what happens. I didn’t have anything planned to say or anything. Just went on and just said, ‘Hi, Steven Aitchison here doing a Change Your Thoughts page.’ Then before I knew it there were about 10,000 people on at one time. I’m going, ‘Holy sh–. What’s going on?’”

By the time Steven had finished his first short video, it had about 50,000 total views. He realized there was a huge opportunity to interact with his millions of followers and immediately launched a daily Facebook Live show.

He mixes up his content by playing off his blog posts while talking with readers, doing interviews with people popular in the self-development niche, hosting live and guided meditations and sharing other personal development videos with commentary.

He urges bloggers to face the fear and do it anyway.

“Tech things can happen, but there have been no really awkward moments.” – Steven Aitchison on Monday, November 6, 2017

Step #6: Study Your Posts’ Performance and Promote the Winners

Pay attention to the organic winners, give them a boost and let them run, Steven advises. Ignore the losers, which will drag down the overall ranking of your page. Learn from both the winners and the losers, and model the winners.

That’s difficult for most bloggers who believe the problem is that not enough people have seen the post, not that it doesn’t touch people.

Steven tracks the popularity of all of his Facebook posts and reposts the most popular content — the posts that rank higher than his average ranking — every three to four weeks. When the reach and engagement of those popular posts drops below average, he retires them for a few weeks or months, then starts reposting them again since his page will have a new set of followers who haven’t seen that post yet.

He credits this one technique — reposting the winners — with dramatically growing his Facebook page, as repostings often did better than the first posting.

Steven always has one eye on what Facebook is pushing and will shift gears at a moment’s notice. 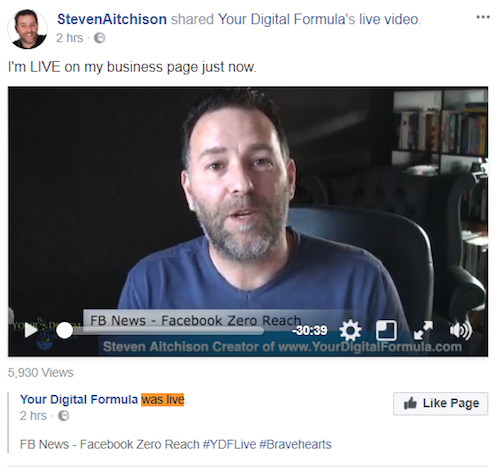 Step #8: Always Be Human and Genuine

Despite millions of followers and Facebook Likes, Aitchison said because of the type of person he is, his head is never in the clouds.

“I always question myself, I always question what I’m doing and I always ask the question, ‘How can I help more people?’” If you ask that one question in every area of your business you’ll quickly feel the disconnection when you don’t ask it, Steven said.

“The biggest compliment I keep getting is, ‘You’re really genuine, you’re really authentic,’ and I think that just being yourself really comes across.”

More Growth Means More People to Connect With and Touch

Steven doesn’t expect that his Facebook page will look the same in a year or two. Nor will his blog or business, except that he’ll be connecting with more people and touching more hearts. He understands that change is the only constant, and he fully intends to roll with Facebook’s direction.

He anticipates his page will evolve as live-streaming becomes more of a focus on Facebook, likely requiring him to upgrade the quality of his live shows to more TV-like quality, in effect creating mini TV shows.

“I think it’s going to be about me getting in front of the camera more,” Steven predicted. “Not something I’m naturally inclined to do, but this is why I’ve been doing Facebook Live for some time now — to get out there, to connect even more with the audience. I see it growing bigger, obviously, along with the challenges.”

He relishes the challenges because they keep him connected to the readers, and it’s that connection that keeps him going.

“I’ll never get big-headed or conceited because I always bring myself back to earth as quickly as I put my head in the clouds,” Steven said. “It’s a nice feeling when people come to you and say, ‘You really changed my life.’

“And I keep on asking the question, ’That’s nice, but the balance is, how can I help more people?’”

Marsha Stopa is senior instructor and coach for all Smart Blogger courses. She's living her dream in the Blue Ridge Mountains in western North Carolina, where she just bought a fixer-upper among the bears on a quiet mountain with a stunning view.

Marsha Stopa is senior instructor and coach for all Smart Blogger courses. She's living her dream in the Blue Ridge Mountains in western North Carolina, where she just bought a fixer-upper among the bears on a quiet mountain with a stunning view.

98 thoughts on “How to Get 3,241 Facebook Fans per Day Without Paying for Ads (Incredible Case Study)”