You’re searching for chiasmus examples to clear up the fuzz surrounding its meaning.

After all, chiasmus isn’t exactly a word you hear every day.

This literary technique is more common than you might think. You’ve probably seen it countless times without even realizing it.

Everyone from William Shakespeare to JFK to Martin Luther King used chiasmus to enhance their message.

And the best part:

It’s one of the easiest yet powerful ways to transform your writing.

Have I got your attention?

Excellent. How about we start with the definition? 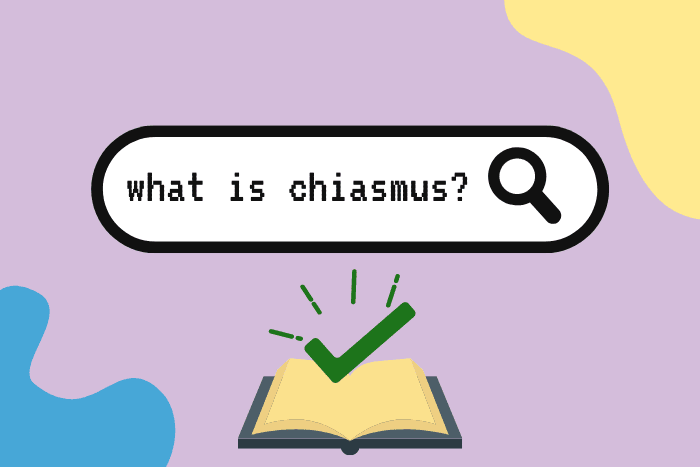 Chiasmus is a two-part sentence or phrase, where the second part is a reversal of the first.

“When the going gets tough, the tough get going” is a simple example of this literary device.

I need to clarify something, though.

Chiasmus doesn’t have to use the same wording in both phrases to qualify as a chiasm.

Check out this example:

“And these tend inward to me, and I tend outward to them,” said Walt Whitman in Song of Myself.

Notice how both parts are reversed for contrast?

The wording may be different in both parts, but the phrase is still chiastic.

The Difference Between Chiasmus & Antimetabole

I’ll be upfront with you.

So which is it?

Well, antimetabole is actually a subtype of chiasmus. But, not every chiasmus is an antimetabole.

And there you have it.

That’s the critical difference between antimetabole and chiasmus:

Antimetabole has to use the same wording to be considered an antimetabole.

It has more flexibility because it can use different words.

For instance, a chiasmus phrase can simply reverse similar concepts or ideas and still maintain its chiastic structure.

“I’d rather die on my feet than live on my knees.” 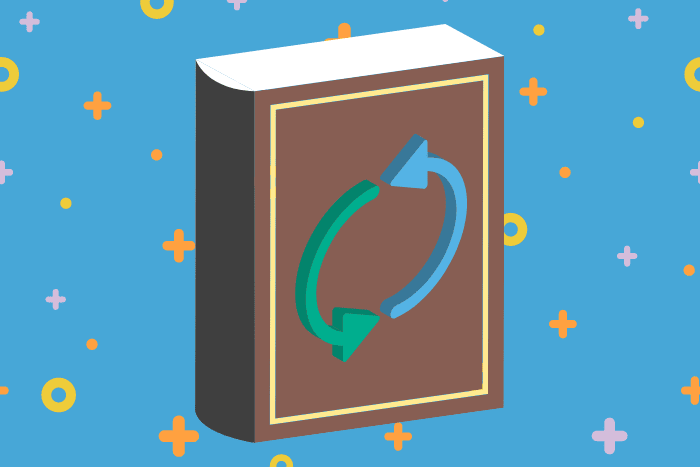 The word chiasmus was originally Greek for “crossing” or “X-shaped.” It gained popularity in the mid-17th century when writers discovered just how impactful this literary technique is.

Let me show you.

Examples of Chiasmus in Literature

Not surprisingly, poets regularly use chiasmus to add a lyrical effect to their poetry. Plus, their verses are more memorable when they repeat words in reverse.

For example, in Paradise Lost, John Milton used a chiasmus when he wrote:

To first of women, Eve”

Milton starts with repetition by using the phrase “first of.” Then he contrasts opposing genders by using “men” and “women.”

And as it turns out?

Milton was a big fan of chiasmus as a literary technique. In another verse from Paradise Lost, he wrote:

“The mind is its own place and, in itself can make a heaven of hell or a hell of heaven.”

We can learn a lot from writers like John Milton.

His poem, Paradise Lost,  is more than just the biblical story of Adam and Eve’s fall from grace. It’s full of literary terms that’ll show you how to be a more persuasive and interesting writer.

But he’s not alone. Other poets used chiastic statements, too.

For example, in Lord Byron’s Don Juan, he wrote:

“Pleasure’s a sin, and sometimes sin’s a pleasure.”

Examples of Chiasmus in Religion & Philosophy

Want to hear something interesting?

Many books of the Old Testament were originally written as Hebrew poetry. This includes Psalms, Proverbs, Ecclesiastes, and Song of Solomon.

So what makes a Hebrew poem poetic?

You see, parallelism is another way to describe chiasmus. In a nutshell, parallel phrases express a single idea in two or more different ways.

“The wicked man earns an empty wage, but he who sows righteousness reaps a true reward. Genuine righteousness leads to life, but the pursuit of evil brings death.“

Another example comes from Matthew 23:12, where Jesus said:

In Mark 2:27, Jesus also used a chiasmus when he said:

“The Sabbath was made for man, not man for the Sabbath.”

God intended the Sabbath day to be a blessing to man. It’s a day for spiritual refreshment and rest.

Examples of Chiasmus in Pop Culture

Actress, Mae West, was famous for her one-liners. She was witty, funny, and entertaining to watch.

In fact, one of West’s most classic catchphrases was also an example of chiasmus. She said:

The truth is, Mae West was the queen of using literary devices to craft lines that made her a superstar.

In modern film, though, Yoda has taken the crown as the king of chiasmus — he switches words around constantly.

For example, in The Empire Strikes Back, Master Yoda said:

“Once you start down the dark path, forever it

will it dominate your destiny, consume you it will.”

Here’s a clip of Yoda speaking using a chiasm: 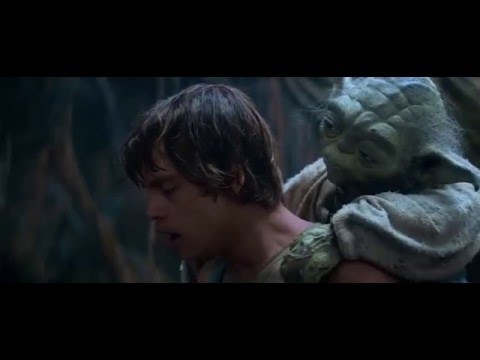 I don’t care what anyone says. Yoda is the man.

Chiasmus isn’t just limited to the big screen, though.

Crosby Stills, Nash & Young sang a famous song titled “Love the One You’re With” that featured this chiasmus:

“And if you can’t be with the one you love, honey,

Love the one you’re with.”

Examples of Chiasmus in Comedy

There’s one thing for sure:

The movie Mean Girls has become a cult classic, and it hasn’t even been around 20 years yet.

And you know what?

The movie even has its own designated day. Social media and movie fans around the world celebrate October 3 as “National Mean Girls Day.”

That said, it’s no surprise that this movie uses chiasmus to inject humor into the script.

Here’s a prime chiasmus example from the movie:

“Laura, I don’t hate you because you’re fat. You’re fat because I hate you.”

Check out this clip: 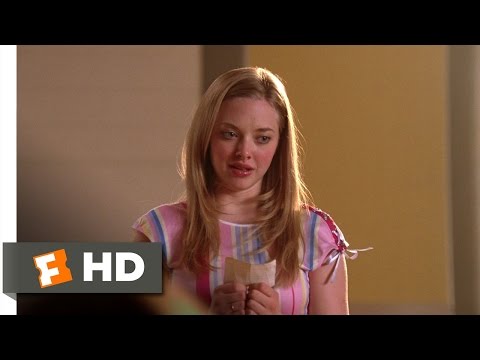 Another chiasmus example comes from Dorothy Parker. She said:

“I’m not a writer with a drinking problem; I’m a drinker with a writing problem.”

Parker was a poet and writer who was known for her wisecracks and witty comments.

Speaking of witty comments, Yogi Berra was well known for those too.

Berra was a famous American baseball player for the New York Yankees. And in March 1986, he was trying to tell Houston journalists that he wasn’t responsible for all the comments attributed to him.

“I really didn’t say everything I said.”

This chiasmus statement was later featured in the LA times because of how funny it was.

Examples of Chiasmus in Speeches

John F. Kennedy’s speeches are chock-full of rhetoric. He used everything from anaphora, antitheses, repetition, and more to express his ideas.

He gave us two prime chiasmus examples when he said:

So that begs the question:

Why did JFK use literary devices like chiasmus so much?

Because it allowed him to persuade his audience and leave a tremendous impact on the world.

The use of rhetorical devices also made his quotes memorable, hence why they’re still repeated decades later.

Niccolò Machiavelli, an Italian politician, was also no stranger to the benefits of such rhetorical devices.

Here’s one of his famous chiasmus examples:

I’d say he had a point, wouldn’t you? 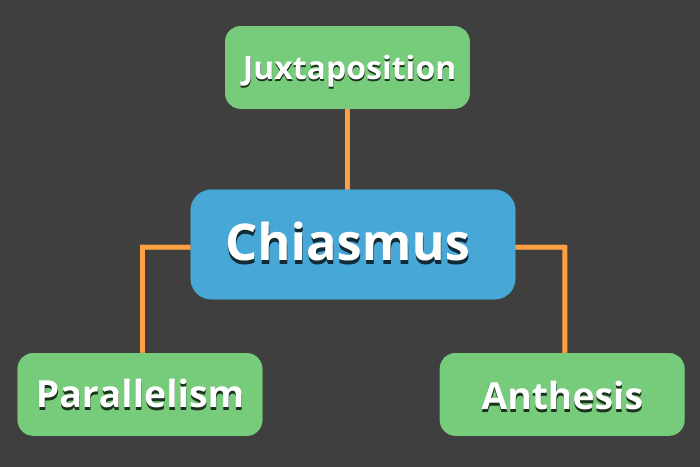 For starters, a chiasmus is a type of inverted parallelism.

But how does chiasmus differ from antithesis?

Well, antithesis creates a contrast between words or ideas. Chiasmus, on the other hand, reverses grammatical structure or wording in successive phrases or sentences.

“That’s one small step for man, one giant leap for mankind.”

But here’s the deal:

Chiasmus isn’t just about placing related concepts together for contrast. Instead, chiasmus takes it a step further by actually swapping the order of the parts.

Why Use Chiasmus in Your Writing?

Writing, if done well, can open the hearts and minds of your readers.

It can also inspire them to take action, entice them to buy a product or service, or relate to them on a deeper level.

Don’t just take it from me, though. Even Forbes believes in the power of writing, having recently published an article calling writing the “most important skill” to have in business.

How can I stand out amongst the sea of other content creators?

How can I create content so good that it resonates with people?

Successful writers — the ones who grow a fan base of loyal readers — use literary techniques like chiasmus.

You can too. When you use chiastic patterns in your writing, you can:

That, my friend, is why you want to use chiasmus in your writing. Because it gives you an edge that makes your content more memorable, punchy, and quotable.

So now the question becomes…

How Can I Apply These Chiasmus Examples to My Writing?

If you want to add more gusto to your writing — and I mean really take it to the next level — then you’ll need examples and inspiration.

The next time you see a chiasmus example you like — hopefully, you found a few in this post — put it in your swipe file for safekeeping. Then, when you’re ready to write, revisit your examples and let them inspire your own powerful words!

Successful artists and writers have been doing this for ages.

1 thought on “15+ Chiasmus Examples & Definition: Write Like Yoda, You Will”