Has this ever happened to you?

Something in your timeline catches your eye.

It’ll only take a few seconds to check it out, right?

And before you know it, an hour has passed and you’re left wondering where the hell your time went.

It’s a common problem. Twitter’s a powerful tool for bloggers, but it’s also a dangerous distraction.

Scrolling endlessly through your feed can feel productive – particularly when you tell yourself it’s research – but deep down you know it’s the opposite. Even the “proven” social strategies seem to deliver nothing.

So, is it possible to get the benefits of Twitter without being sidetracked by the distractions or wasting time on ineffective tactics?

In fact, it’s possible in just 15 minutes a day. Here’s how…

The Secret to Getting Better Results in Less Time on Twitter

Twitter can be a valuable tool for bloggers, but it can also be a major time suck. Being successful on Twitter with minimal effort means being ruthless with your time.

Firstly, the Twitter platform itself is loaded with distractions. The feed constantly updates, leaving you anxious to stick around just to see what the next tweet says. Twitter Ads and “helpful” suggestions of new people to follow threaten to send you down a new rabbit hole every few minutes. And frankly, it’s overwhelming.

Secondly, the web is swimming with advice about getting better results from Twitter and so you can easily struggle to cut through the noise. A Google search for “Twitter marketing” returns 678 million results. Good luck sorting through all that! The result is that you feel constant pressure to try the latest strategy without knowing whether it will work.

Despite these distractions, a couple of simple rules will help you make the most of your Twitter time without becoming a Twitter addict.

It’s counter-intuitive, but you can achieve most of what you need to do as a Twitter-savvy blogger without actually visiting Twitter.com.

Minimizing the time spent on the main site lets you focus on your agenda – not Twitter’s – and numerous tools exist that allow you to leverage the platform more indirectly.

Rule #2: Stay focused on a small number of goals

Much of the overwhelm that bloggers experience in relation to Twitter comes from a lack of focus. They try too many approaches at once, hoping that one of them will lead to success.

That’s why it’s important to get laser-focused on a few goals.

Let’s look at what those goals should be.

Sure, other goals may lead to more blog traffic, but time spent on these two has the best chance of yielding results. Here’s why:

Remember, we’re not trying to do everything that works. Just to get smarter about where we’re spending our time.

The Most Effective Tactics for Getting More Followers and Conversions

If you want Twitter success in just 15 minutes a day, that doesn’t leave a lot of room for goofing around.

Getting more Twitter followers and converting more tweets into clicks boils down to using a small number of proven tactics.

So let’s review those tactics before digging into how you can make them work effectively in the least possible time.

Those are the basic tactics. But how will you implement them without sacrificing too much of your precious time to the Twitter gods?

The tactics described above are highly effective, but they still have the capacity to eat into a big chunk of your day.

The key to time-efficient Twitter mastery is to find ways to get the benefit from the various tactics without having to spend lots of time on them.

And there are three basic strategies for achieving more in less time:

Let’s take a closer look at each to identify all the ways you can use Twitter not just faster, but better.

One way to spend as little time as possible on Twitter.com is to be as efficient as possible while you’re there.

So did you know that Twitter has simple keyboard shortcuts for common tasks?

Imprint these on your brain to save mouse clicks – and precious time:

Some of these work in popular Twitter apps such as TweetDeck too!

Retweeting and favoriting influencers’ tweets are powerful tactics, but how do you find them without getting lost in a river of content?

The trick is to create a small number of carefully-curated lists of Twitter influencers. Once you have a list, you can bookmark its URL and navigate directly to that page when you visit Twitter, avoiding your main feed altogether. 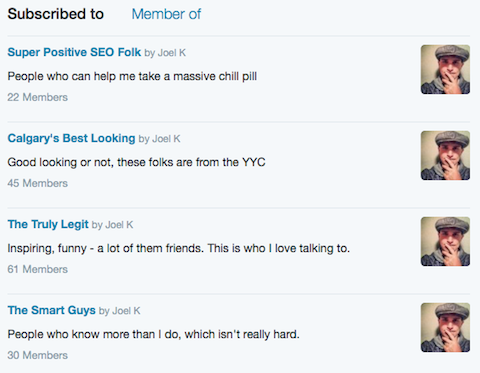 Third-party tools such as TweetBe.at and Twitlistmanager make building Twitter lists very easy. And if you are following a specific hashtag – for example one related to a live event – the List Builder for Twitter Chrome extension can automatically create lists based on hashtag use.

If you really want to get fancy with lists, you can use Zapier to save tweets from influencers to a Google Spreadsheet. There, you can analyze them further and keep a real-time swipe file of inspiration for your own tweets.

Most bloggers are aware of Buffer – it’s a fantastic tool for scheduling your Twitter (and other social media) updates in batches.

But Buffer also has a couple of less-well-known features that will help you discover high-quality content to share, normally a time-consuming task.

Similar to Twitter lists but centered around sites not users, the new “Feeds” feature connects your Buffer account to your favorite site’s RSS feeds so you can add articles to your queue with a single click.

Also, check out the Daily app (iOS only) – a Tinder-style app that uses the “swipe right if you like it, swipe left if you don’t” model to quickly share from a list of daily favorites curated by the Buffer team. 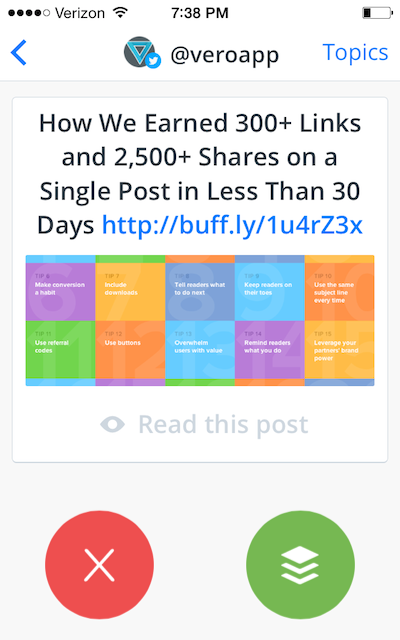 Discover the perfect time and frequency for your tweets

You wouldn’t be surprised to learn that tweeting when it’s the middle of the night for most of your readers is unlikely to get the best results. But working out the optimal time for your tweets is not so easy.

Tweet frequency also affects results. Track Social found that brands get much higher engagement – up to 300% – by tweeting more than once a day. But more than five tweets per day lowered engagement levels. Of course, this doesn’t mean that five tweets per day is the right formula for every blogger, but a sweet spot likely exists for your audience too.

Another school of thought says the more you tweet, the more clicks and retweets you’ll get overall, even if the average value per tweet is lower. Buzzfeed posts nearly 100 times per day and still gets 370 retweets per tweet – but they have a large following and will certainly be spending longer than 15 minutes a day on their efforts.

Here are a few tools to help you optimize the timing of your tweets.

You can supercharge various other Twitter tactics by getting smarter about where you focus your limited time.

Automation is the Holy Grail for the time-conscious Twitter user. Setting things up so you can gain followers and increase traffic without any additional manual effort on your part (beyond any initial configuration) is one of the best ways to scale your Twitter activity.

Fortunately, you have no shortage of automation options.

The downside is that searching for the perfect set of automations is just another time suck, so find a few tools that work for you and ignore the rest.

The following list is a great place to start:

Now that you have all the tools you need to manage Twitter efficiently, it’s time to craft a 15-minute plan of action.

Here’s a template you can use to plan your own Twitter strategy, broken down minute by minute.

1 – 5: Check your Twitter notifications and reply to people who have questions. Check analytics in Buffer, Hootsuite or Twitter Analytics for yesterday’s wins. Apply those lessons to today. Specifically, look for tweets with a high number of clicks or retweets. If you’ve found something that works well, schedule it again and don’t be afraid to ask for a retweet from someone influential.

6 – 10: Check email alerts from Buzzsumo, Mention, Nuzzel, etc. Schedule tweets/retweets in Buffer and add relevant content ideas to your swipe file. Share your latest content with your best followers and ask them to share it. Pro tip: Make sure your Evergreen Post Tweeter schedule doesn’t overlap directly with your Buffer schedule. Use the data from Tweriod to optimize each.

11 – 15: Add content to your Buffer queue via RSS feeds. Add your own content and that of other influencers. Try to share content your followers won’t find elsewhere by regularly visiting relevant subreddits and forums. Use Hashtagify.me to add the best hashtags.

Either they launch themselves headfirst into every new Twitter strategy and try not to worry too much about all the time they’re spending (or maybe wasting) on social media.

Or they ignore Twitter altogether and simply try to suppress the fear that by doing so they’re making a huge mistake and missing out on tons of targeted traffic.

The Twitter minimalist creates the perfect balance between effort and results.

They focus on just a few tactics. They get efficient with necessary manual tasks; they optimize to achieve better results; they automate to put their Twitter success on autopilot.

So why not invest a little time in creating your own 15-minute Twitter power plan?

Because when you do it right, a little effort can go a long way.

About the Author: Jimmy Daly is the content editor at Vero. Based in Tucson, Ariz., he is a runner, fitness nut and outdoorsman. Follow him on Twitter and Google+ for updates on email marketing, content, productivity and fitness.

58 thoughts on “The Minimalist Guide to Twitter: How to Handle It in 15 Minutes a Day”