Let’s cut right to the chase…

If you want to find the best affiliate networks in 2021 so you can start earning some sweet passive income, you’ve come to the right place.

No overwhelming list of 100+ affiliate networks that all sound the same.

No superficial content that doesn’t help you answer the only question that matters: what’s the best affiliate network for me?

Here’s what we’re going to do:

I’m going to briefly answer some common questions, show you the top affiliate networks we recommend for 2021, and quickly break down each of them for you.

You will then take the information, choose an affiliate network to join, and start making money online.

Then let’s get started.

Up first are the questions and answers.

What is an Affiliate Network?

Through a single portal, affiliate networks give publishers access to numerous affiliate programs.

If that sounds like a bunch of gobbledygook, don’t worry. Here’s the important part:

You monetize your blog with these affiliate programs by using a process called affiliate marketing.

What is Affiliate Marketing?

Affiliate marketing is a new twist on an old idea: getting a finder’s fee when you refer a customer.

You introduce your audience to a product or service and, if they buy using your unique affiliate site link, you earn a commission. There are even CPC (cost-per-click) affiliate programs that pay you every time someone clicks your link (PPC or “pay per click”), as well as CPL (cost-per-lead) programs that pay whenever you send a them a prospect.

However, many of the most profitable affiliate websites are those that refer sales.

Free Bonus: How to Go From $0 to $1,000 in Passive Income With Affiliate Marketing

In other words: find a product or service you like, promote it to your blog’s readers, and earn part of the profit on each sale.

Can You Really Make Money with an Affiliate Marketing Program?

Slightly (ahem) on the other end of the spectrum, one of my affiliate programs has earned $3,450 over a span of 3 years.

That’s not “quit all of my freelance jobs” money. It’s not even “hire Nicolas Cage to attend my birthday party” money.

However, as passive income resulting from a single landing page I created years ago, with minimal time spent on outreach and SEO, it’s not too shabby.

Your mileage can and will vary, of course.

Smart, attractive people just like you do it every day.

So, that begs the question…

What is the Best Affiliate Network?

That’s what I’m going to help you figure out.

I’ll give you the breakdown (in no particular order) — you choose the network that best fits your needs.

The Best Affiliate Networks in 2021

The Scoop on ShareASale

Thanks in part to its solid reputation, ShareASale is trusted by quite a few big-name companies.

Over 1,000 merchants and influencers, such as WP Engine and OptinMonster, are exclusive to the network.

If you want to advertise their products, you can only do so through ShareASale.

That’s one of the reasons entrepreneurs like Jessica Bishop of The Budget Savvy Bride swear by it:

ShareASale was the first network I joined as an affiliate, and it is still my favorite to this day, nearly a decade later! They have a huge assortment of merchants across a variety of niches so you are sure to find lots of great stuff to promote.

Who Should Join ShareASale?

Anyone who’s looking for a reliable affiliate network that offers a wide variety of affiliating marketing options (thus eliminating the need to join multiple networks) should give ShareASale a try.

Whether you want to offer services, physical goods, SAAS (software as a service), or digital downloads to your audience, ShareASale (affiliate link) has you covered. 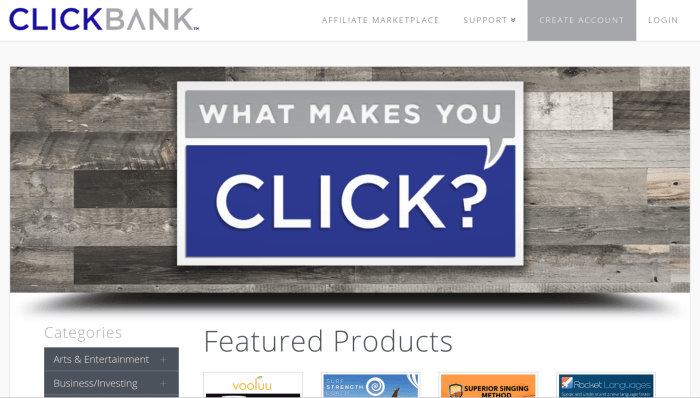 The Skinny on ClickBank

By focusing on digital products created by entrepreneurs from all over the globe, ClickBank offers some of the highest paying affiliate opportunities (man of which you can’t find anywhere else).

While ClickBank itself, the network, has a solid reputation, some of the products offered by its merchants can be questionable.

You have to do your homework. If you do, you’ll be fine.

If you don’t, and you end up promoting some subpar products, your audience won’t be happy.

(For the record: this advice is applicable to every affiliate network.)

Who Should Join ClickBank?

If you’re looking to exclusively promote digital products, and you want (literally) millions of options (many with high commissions), ClickBank is a good bet.

The Lowdown on CJ Affiliate

It offers lots of bells and whistles, such as real-time reporting.

That means you can monitor activity on your account as it happens.

(No more having to refresh your browser every five seconds like a caveman.)

Who Should Join CJ Affiliate?

Anyone with an established audience who wants a feature-rich affiliate network will find a lot to like with CJ Affiliate.

However, it may not be a good choice for beginners.

Because accounts are deactivated if you go six months without earning a commission, and because their merchants have a reputation for being picky on who they accept as publishers, CJ Affiliate is best for those who get steady traffic to their websites.

However, if you already have an audience of modest size and engagement, you’ll appreciate what CJ Affiliate has to offer. 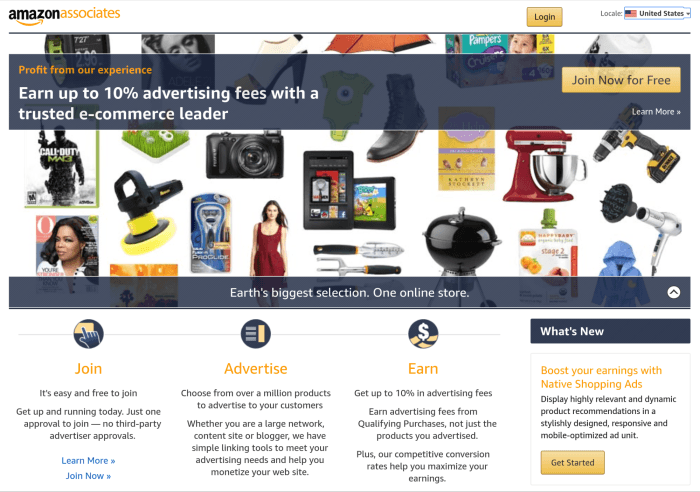 The Rundown on Amazon Associates

By offering the entire Amazon catalog, no affiliate network can match the sheer volume of physical and digital products offered by Amazon Associates. Plus, Amazon’s conversion rates tend to be very high.

Including affiliate links in emails is against Amazon’s company policy, so keep this in mind if email marketing is your primary method for promoting affiliate products.

Who Should Join Amazon Associates?

Affiliate marketers who are familiar with the Amazon ecosystem will feel right at home with Amazon Associates. Though its commission rates aren’t as high as others, Amazon affiliate offers are typically solid.

Those looking to promote services should look elsewhere, but anyone who wants to focus on physical and digital products will find millions of different opportunities in hundreds of different categories with Amazon Associates.

The 411 on eBay Partner Network

One thing that sets EPN apart from other affiliate networks is the way it lets you promote… unique offerings.

With the eBay Partner Network, if such a transaction ever takes place, you could earn a commission on it.

Who Should Join eBay Partner Network?

If your focus is on physical products and you want the peace of mind that comes with doing online business with a large company you’re already familiar with, eBay Partner Network is a great option.

The Skinny on FlexOffers

When you sign up with FlexOffers, you’re assigned a dedicated affiliate manager to help you navigate the affiliate marketing waters.

This makes it a good fit for both beginners and veterans of affiliate marketing.

Who Should Join Flexoffers?

Don’t let its youth fool you.

If you want lots of affiliate options, great support, and quick turnaround on payments, FlexOffers is a solid contender.

The Scoop on Pepperjam

Publishers and merchants can communicate with one another inside the Pepperjam system.

Want to ask a merchant who caught your eye a question? Have at it. Flirt away.

Pepperjam actually encourages communication so strong relationships can be built.

Who Should Join Pepperjam?

If you value transparency and customer support, you’ll be hard pressed to do better than Pepperjam as an affiliate network.

The Lowdown on Rakuten Marketing

It’s been ranked the #1 affiliate network for 9 straight years by an industry publication that presumably knows about such things.

Who Should Join Rakuten Marketing?

If you want an affiliate network with an intuitive user interface, a great reporting system, and the kind of solid reputation you can only earn by being in the business for two decades, Rakuten Marketing is a great selection.

Let’s cut to the chase one more time…

Which affiliate network are you joining today?

Which one is going to launch you on the path towards Pat Flynn and John Lee Dumas levels of ginormous passive income in 2021?

You now know the track records and distinguishing details of 8 great affiliate networks. You have the know-how.

So now it’s time to choose.

It’s real. It’s out there. And it’s yours if you want it.

Then let’s do this thing.